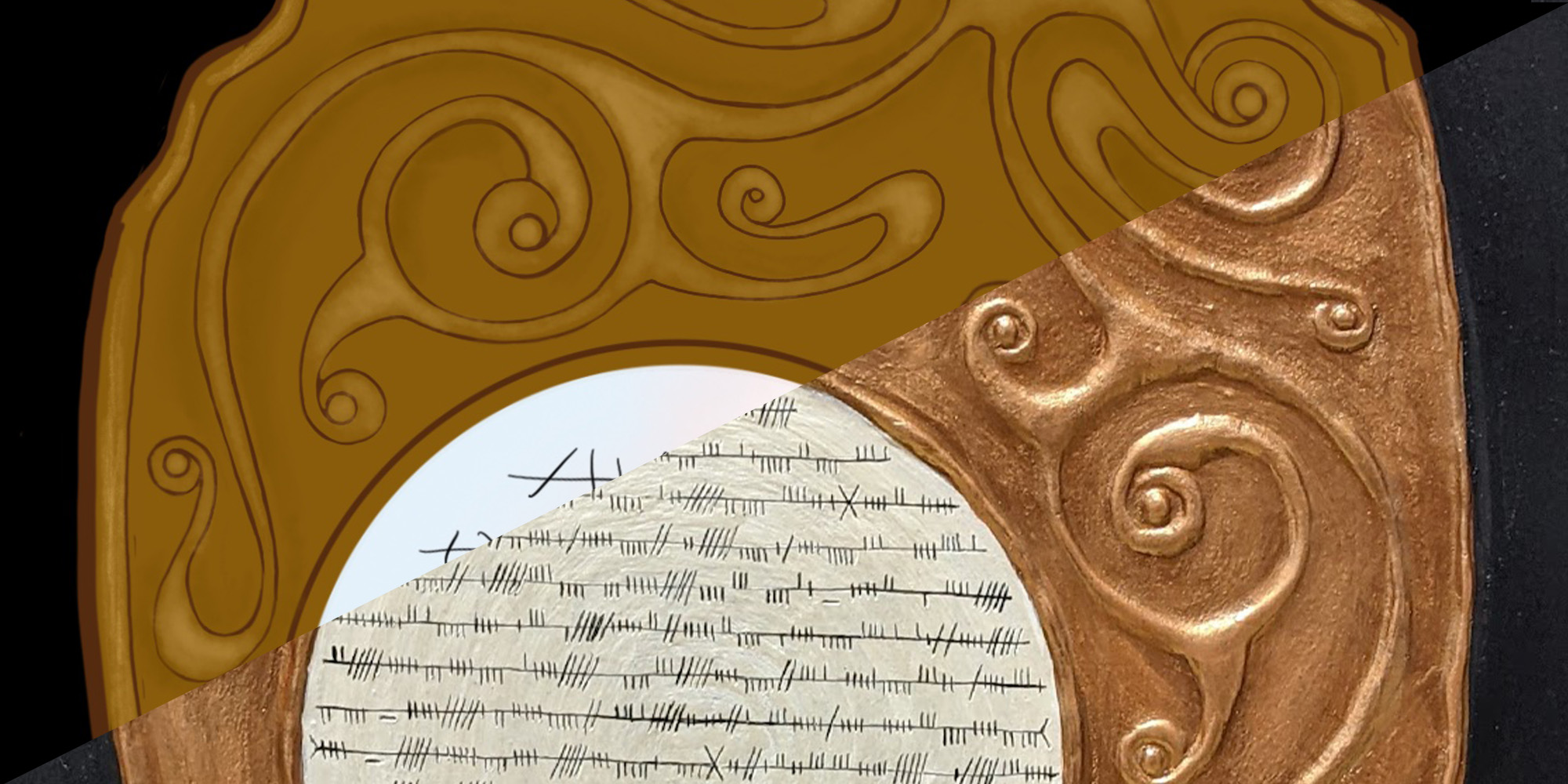 Scroll for the Pearl award granted to Rúna Skógadóttir in November 2021. Design mine, inspired by the Loughnashade trumpet, a Polden Hill harness fitting, the Clanmacnoise torc, and various Iron Age coins from the South Norfolk Hoard and the Hallaton Treasure. Artwork made beautifully-real by Kolfinna Valravn. More comprehensive writeup below.

My final “sidecar” scroll, created to include arms which, while necessary for the award, are quite out-of-period for the main scroll:

Whenever Kolfinna drops a message to me asking if I want to collaborate, I say yes.

So when she popped in to say that she had a scroll assignment for someone who’d appreciate spirals—my favorite ornamentation—I was doubly excited.

Rúna Skógadóttir was slated to receive her Pearl award at Holiday Faire. Kolfinna had been assigned the scroll, and Lanea was to do her wordsmithery, and when I agreed to work with them our Message chat began to bubble immediately.

We began by discussing the sort of thing Runa might like. I had met her briefly when I’d taken her brooch-making class, and had been extremely taken by the spiralling jewellery (especially the rings) she was making. Based on her website, we decided she would probably like something early, bronze, and Celtic.

(And with spirals. All the spirals.)

So I pulled out my books. I knew we were going to have to feature an oyster shell (since the award is called a Pearl), and with that in mind I went looking for inspiration. When I hit upon a photograph of the Loughnashade Trumpet the wheels started turning, and as I turned the pages I developed a more firm picture of the kind of ornamentation I wanted to use (as well as what I didn’t). After paging through an additional book I was confident my initial intuition was a good one, and I decided to move forward.

After a bit of research, I determined that using actual sheets of a pearlescent natural material was out, so the pearl itself would have to be ground mica. Which was fine, because that was what the bronze was going to be as well. Materials decided, it was time to tackle the design.

So I went researching oysters.

(Life always brings something new to the table, doesn’t it.)

While there are specific types of oysters called pearl oysters, technically all species of oysters are capable of creating pearls. Therefore I could choose whatever species made most sense for the location and time period.

The only species of native British oyster is called Ostrea edulis, or the European flat oyster. I found evidence of a variety of shapes, anywhere between long and narrow or shorter and broad, which meant the form factor was up to me. I chose something with a relatively square/ round aspect ratio, reasoning that this would make finding a balanced location for the pearl within the piece easier, and even more importantly, would better facilitate the placement of ornamentation from the round endplate of the Loughnashade Trumpet.

I began to sketch.

Decorating the foot of the oyster was necessary to balance out the ornamentation planned for the top. As I mentioned earlier, I had first met Runa because she had taught a class on wirework brooch construction, and the spirals she produced for her jewellery seemed to fit the brief perfectly. (The time period for this jewellery is earlier than the Trumpet, but given how broadly spirals are repeated within Insular artwork over literally centuries, I didn’t think it mattered that much.)

Her wirework spirals would fit well into the space for the oyster’s foot, and would add a bit of grace to what might otherwise have been a heavy area of the design. I drew them in a doubled spiral, my rendition of those which she frequently featured in her jewelllery…most particularly a ring of hers which had caught my eye, and which I was inspired to some day to create for myself. The foot became a triple spiral, the sacred three, a seminal trio of Celtic folklore.

I sent Kolfinna and Lanea the first sketch. We’ve all worked together before—a more-personal trinity, one which works well for creativity and levity alike. I create the design. I send it off to Kolfinna to make the design real. Lanea wordsmiths to perfection, supporting us all the while.

Unlike my compatriots, I am a serious night owl. Which meant I had several hours to glance past the sketch in our chat window, and realise after a few hours that it looked…annoyingly like a glove and softball.

Each time I looked, there it was. A glove and softball.

Hour after hour, a glove and softball.

And what is seen cannot be unseen.

I dropped a note in the chat about what I was seeing, which of course meant that I’d forced upon the other two that same unforgettable knowledge. Misery loves company.

I created a new sketch.

This updated shape was longer and more narrow. The benefit to this new shape was threefold (yes, another three): One, it meant no more glove and ball. Two, it meant that the artwork would set better in the 11×14 panel that Kolfinna had chosen. And three, it meant I didn’t have to try to find the exact balanced center for the pearl; I could zhoozh it to one side, and seek balance without symmetry.

Due to our deadlines, it’s generally important that Kolfinna and I work concurrently. So I sent her the final outline (so that she could begin laying it out on the board), and then I could get to work on the interior decoration.

I knew it was going to be based on the Loughnashade Trumpet, but I also knew that the Trumpet’s surface was round, whereas the oyster’s surface was (increasingly) oblong. The Trumpet’s ornament was symmetrical, but the coverage needed was asymmetric. Invention was needed.

But in order to build the foundation for this invention, I needed to incorporate multiple references.

Now, the Loughnashade Trumpet itself is a 1st century CE bronze horn, the only one remaining from a set of four found in a bog in County Armagh. The end plate is decorated with repoussé spirals and lotus motifs, the extent of which would take me about 80% of the way toward the needed coverage. In order to extend the decoration to cover the remaining 20%, I borrowed inspiration from another find from the 1st century CE: The Polden Hill Hoard.

The Polden Hill Hoard consists of horse gear and trappings made from copper alloy and with red glass inlay, found in a clay-lined pit ploughed up in Somerset. The inlay was inconsequential for this project, but what I did borrow was the elasticity of the line around the spirals, especially those curves extending out from the trumpet-motif shapes.

One continual challenge of this design was reconciling the extreme contrast of weight in the attenuated spirals in the Trumpet’s ornament with the contrast inherent in the manner of production and the materials used. The relatively smaller proportion of thick-to-thin ornament weight on the Polden Hill fittings, as well as the actual construction of some of its pieces, helped me negotiate this discrepancy.

All that being done, I had a full design which I could shunt over to Korrin overnight, and wait for the questions the next morning.

Fortunately, there weren’t many. One asset to the way she and I develop these scrolls is that we are constantly in conversation, which both minimizes surprises and lets us focus on our strengths without worrying overmuch. (It helps that we trust each other with our parts of the equation.)

We discussed the degree of relief she could reasonably create with her construction method, and clarified the layout and orientation of the Ogham.

The only real remaining question was what to do about arms. The Pearl is a Grant of Arms award, which means arms must be included and laid out in a relatively specific way, but being an early period scroll with a corresponding aesthetic, the inclusion of overtly-medieval arms would detract from the scroll. Fortunately, while I was working on other things Kolfinna was busy problem-solving. She worked out a miniscroll that could accompany the main scroll, thereby including the arms without affecting the overall aesthetic.

She’d planned out a frame of early period artwork and Ogham surrounding the later-period arms, at which point I tagged in. I took her initial layout, and plugged in the specific exemplars she needed.

The piece was going to be something like 5×7″, which set certain parameters for achievable and effective design. I knew at once the overall frame needed to be the Clanmacnoise torc, due to the clarity of its silhouette and the simplicity of its ornament. It would be readable at small size, and didn’t need her to somehow create tiny details at a tiny scale, with a material that just wouldn’t handle it.

Annoyingly, finding an appropriate image of the torc took a moment, because at some distant photoshoot a decision was clearly made to photograph the torc upside down. Possibly this was simply because it was easier to prop it vertically with the flatter side down, but for whatever reason there was no question in my mind it was wrong, based not only on my experience wearing torcs, but also my fluent experience with gravity. I reversed the orientation so the heavy bead lay at the bottom of the circle.

(That decision has since been backed up by a photograph in a book, so I feel even more confident in my call.)

Kolfinna herself chose the Waterloo Bridge helmet as the exemplar for the helm, which was the absolute most perfect choice, both for its character and for its legibility at small scale.

Our mantling around said helm was based once again on the Loughnashade Trumpet ornament, which tied both main scroll and miniscroll together.

And finally, the form of the animals in Runa’s arms was derived from various Iron Age coins from the South Norfolk Hoard and the Hallaton Treasure; these coins are slightly more detailed than we give them credit for, but they also have to solve the same problem as these specific heraldic animals do: the need to be instantly understandable at small size, without a surfeit of detail. Coins are my favourite reference points for heraldic animals in this region and time period.

At this point we had a discussion about what colours to use for the miniscroll’s frame and Ogham, but otherwise my work was done.

Kolfinna did a marvellous job making this design a reality. It’s a true joy to work together with a trusted collaborator whose skill nests so fluidly with mine, and I was honoured to join with her to create a piece for an artisan whose work I enjoy—and whom I look forward to getting to know.

And as always, having Lanea in the mix to lend her wordsmithery and support is just icing on the cake.

All told, this has become my absolute favourite method of creativity within the SCA. Creativity, skill, friendship, service, and a WHOLE LOT of laughter. What’s not to love?